She expresses, through her music, some of the deepest, indefinable parts of the human condition.LisaMarie DeSanto 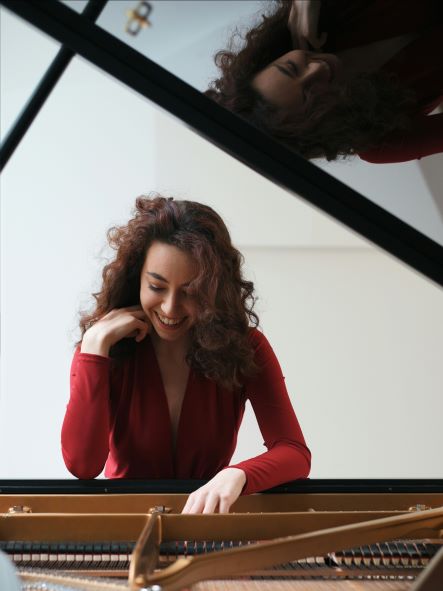 Alice Burla, a performer from a very early age, has made it her purpose to spread love and healing through music.

Most recently Alice became a laureate of the Sydney Int'l Piano Competition and the Concours musical Int'l de Piano Montréal. She was awarded the 2020 Migros-Kulturprozent Prize, the Prix Collard with the Kiefer Hablitzel │Göhner Music Prize and the Schenk Stiftung Soloist Prize, after which she performed Prokofiev’s Concerto No. 2 with the Argovia Philharmonic in November 2021, winning an Audience Prize after the performance. She is also a laureate of the 2019 Concours Int’l de Piano Antoine de Saint-Exupéry and the 2019 Royal Birmingham Int’l Piano Festival Competition.

After her debut with the Sinfonieorchester Basel in 2018, Alice joined the orchestra once again in 2021, performing Rachmaninoff’s Rhapsody on a Theme of Paganini under the direction of Felix Mildenberger. She has performed as a soloist with several other orchestras, including the Brooklyn Philharmonic, Manhattan Chamber Orchestra, Donetsk Philharmonic Orchestra, Torun Symphony Orchestra and Chamber Orchestra Amadeus.

Her performances have been featured on national radio broadcasts in Spain, Switzerland, Italy and the US, as well as on leading platform Medici.tv and American PBS telecasts of “Live from Carnegie Hall”. She was also featured as a young prodigy in 20th Century Fox major film Wall Street: Money Never Sleeps among leading actors such as Michael Douglas and Carey Mulligan.

Alice was one of the youngest students ever accepted to the Juilliard School at age 6. From 2013-2016, she studied with legendary professor Dmitri Bashkirov at the Escuela Superior de Música Reina Sofía in Madrid. Alice is currently in postgraduate studies with Claudio Martinez Mehner and Anton Kernjak at the Musik Akademie Basel, where she completed her Bachelor and Soloist Master degrees.